Dances From The West And Central Serbia

Shumadia represent the heart of Serbia, where you can find the most beautiful and the most interesting original Serbian folk dances. The tiny and delicate steps of these dances areconnected in filigreed dance which has ethnographic and historical significance interwoven with customs. Costumes for this dance represent special visual experience, and each part of the costume is the work of art.

These are the dances from east Serbia where Vlasi and Serbs live together. Like everything else in Yugoslavia, customs and dances of these two nations are mixed. Vlasi used to believe that tripping could drive out the spirits of the earth, so these quick steps represent the most interesting part of this dance. Costumes for this dance are typical shepherds clothes (sheep’s wool vests and capes, walking sticks…), which they wore while guarding the sheep

Serbian dances from Gnjilane are the dances from the cradle of Serbian spiritual culture and tradition. They have been made according to the notes of sisters Jankovic and represent stylized dances with the original elements of the Serbian dances from Kosovo. The national costumes are highly estimated by the jury at various contests. This dance also won the 1st place at the contest “Amateurs to their own city” in 2002.

Represent dynamic dances from southeasternerbia in which the habits of Bulgarian and Serbian population are interlaced. In this dance you can see the elements of Bulgarian folklore in all its dynamics and the fast changing of choreographical motives and shapes.

This dance from the south Serbia represents the mixture of noble and oriental dancing style. It begins with inviting girl’s dance followed by the noblemen dance and it ends in wild and high-spirited "cocek " dance performed by the gypsies. The fact that this region was five hundred years under Turkish rule is best seen in costumes.

Dances From The Nisava Valley

In the central part of south Serbia, in the valley of the river Nisava in the hillside of the Old Mountain, originated dances of Serbian population that are pervaded by influence of Bulgarian folklore. National costumes represent characteristic expression of the district from which these dances originate.

Macedonia is a former republic of Yugoslavia whose dances are well known of the strong fillings that they express. Virtuous dancing elements are connected in interesting chorography, and Macedonian folk music with its specific rhythms represents great challenge for every artist. Costumes are rich with ornaments and motives.

Soldiers and sailors were spending rare free moments fighting for the girls and the bigest problems, as always, were their oficiers...

These, probably oldest Serbian dances originate from the territory of the former Yugoslavia named west Herzegovina. They are performed without music because in the period when they become all cultural activities have been maintaining in secret because of the hateful invaders. The dance starts with slow tripping on the rocky ground, which made interesting sound that simply invites you to proceed with dancing. At the same time this dancing was a test of strength and endurance on which bases future marriages will be arranged. Costumes are very simple, but both boys and girls are wearing golden coins on their chests, which are making unique sound that adds some special charm to this dance.

Serbian dances from Guca Gora and Sarajevsko polje are the dances of Serbian people from two close regions in Bosnia and Hercegovina. These interesting dances have the extraordinary dancing elements followed by the specific singing of the whole ensemble on the scene. The national costumes are really similar to original ones. This choreography won the 1st prize at the contest “ Amateurs to their own city” in 2002.

The stylized dance “Biljana platno beleše” is a poetic stylization of a Macedonian national song “Biljana platno beleše”. It is performed by beautiful women’s ensemble with long bands in colourful national costumes. The dance represents the mixture of the beauty and grace of the young girls whitening the cloth on the riverside.

These are the witty dances of the cheerful lumbermen during the brakes of the hard and dangerous work.

Monte Negro is a mountain region on the southwest of Yugoslavia. These dances are streaked with highlanders’ jumps and youths flattering in specific way. That courting during the dance becomes competition between boy and girl supported by the others who are gradually joining them. Each costume has its own story and represents a secret for itself.

Vojvodina is a very fertile region in the north part of Serbia settled with lots of different ethnic groups. Customs of Serbs, Rosins, Ukrainians, Slovakians, Romanians and other nations are integrated and connected in choreography filled with attractive elements. Audience often stays breathless while watching dancers performing their acrobatics. 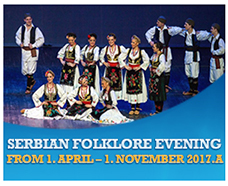 Want to become a sponsor?